One Friday we decided that we were going to a living museum called Old Salem. We all packed into the car and went off for two days. When we arrived, I could seriously tell where the living museum started by the dramatic change in architecture. 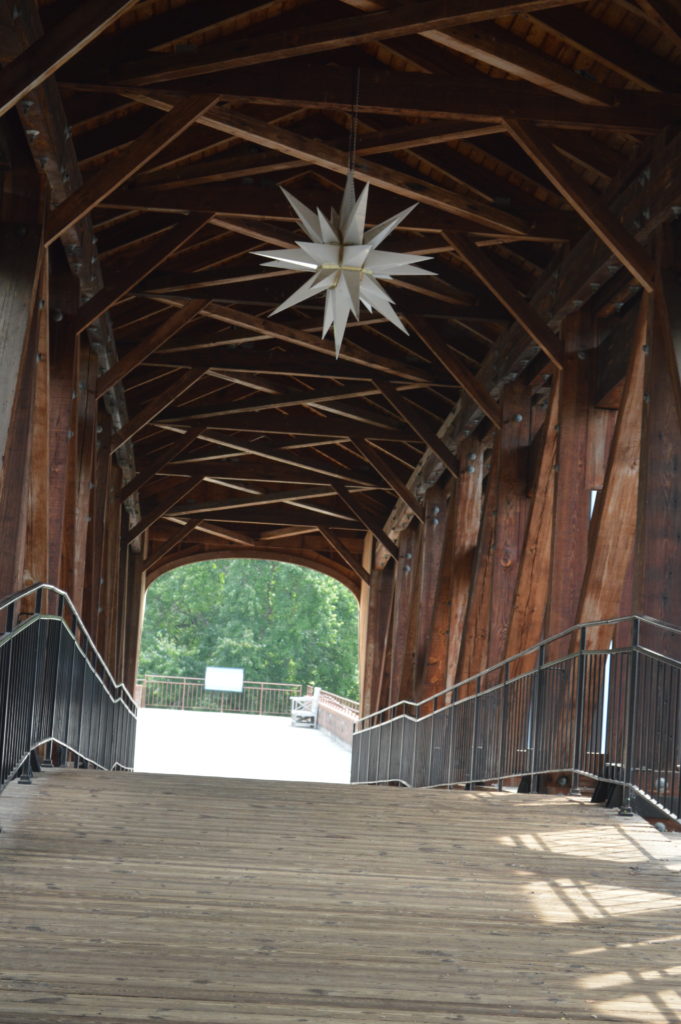 The entrance to the living museum was a bridge that looked old, but was in fact built in 1998. This historic town was the equivalent of a tiny country,  within our country. They had their own governing body up until 1857. Here’s the story.

In 1741 a group known as the Moravians, a branch of Christianity, became interested in some land in North Carolina. The head of the Moravian Church sent six armed men to scout the area. When the people who lived there got wind that armed men were heading their way, they fled out of fear. So when the six Moravians arrived, they discovered a fully stocked farm complete with livestock. They took this as a sign.

Walking down the street, we found private residences mixed in with the living museum shops. These stores were run by actors actively playing roles. We met a bakery, a potter, a gunsmith, a joiner (a carpenter), and many others.

When we walked into the bakery, I immediately smelled fresh bread. It was really cool. They actually baked their products there! We got to see the fully functional wood-burning oven in the back. They also had sweet cake, which was delicious. 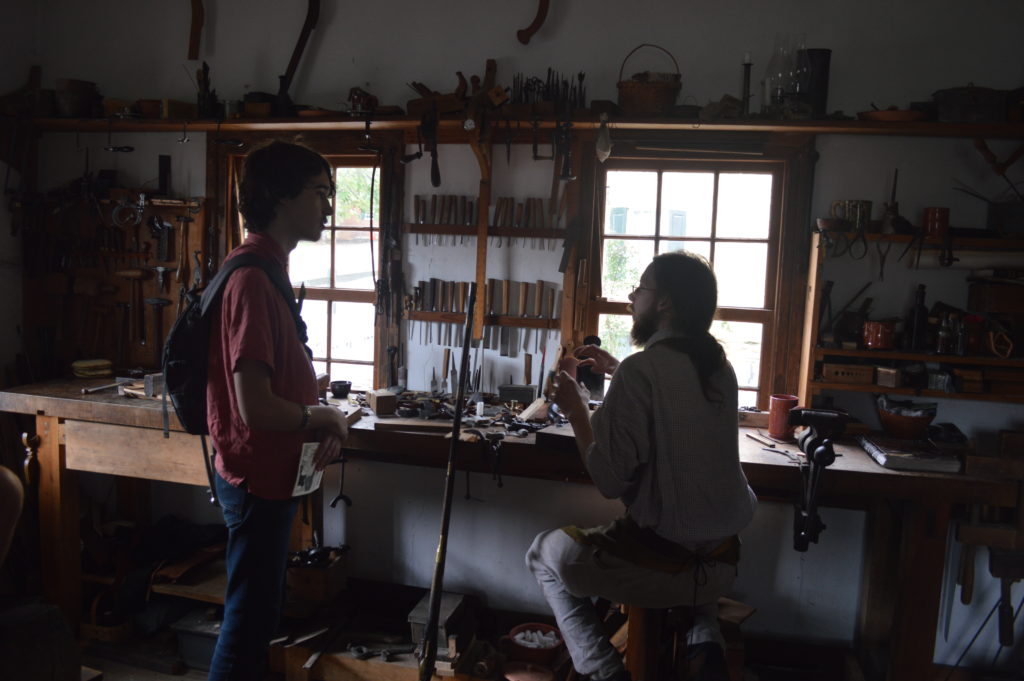 When I visited the gunsmith, I spent some time talking to him about the town. I discovered that the people who had lived in Salem had pretty much walled themselves off from the world except to trade. Everyone in Salem had a different profession. If you were caught doing something other than the job you picked, you would get into trouble. For instance, if you were a blacksmith, you couldn’t fix shoes. However, the gunsmith was allowed to also make locks, because the mechanisms inside the gun were very similar to the ones inside a lock. He was also allowed to work with wood, as it was needed for the gun’s base.

This community setup created monopolies over the various products and services the town had to offer. In my opinion, this system had advantages and disadvantages. On the plus side, everyone had their job and there was no competition. In addition, you could get really good at your profession. On the downside, if you wanted a clay pot, you had to go to the potter and purchase from him only. If you broke the laws they would first give you a couple warnings. Then, if you continued, the entire council would meet and order you to stop. If that didn’t work, you would be banished.

Since the church only leased the land to its people, they could take it away from any member they wanted. Banishment was a huge deterrent, because people loved this town; they loved living there. Salem was popular, because the elders took care of its people. For instance, at this time, if you were a single woman outside Salem, you might have trouble surviving. Not so in Salem. 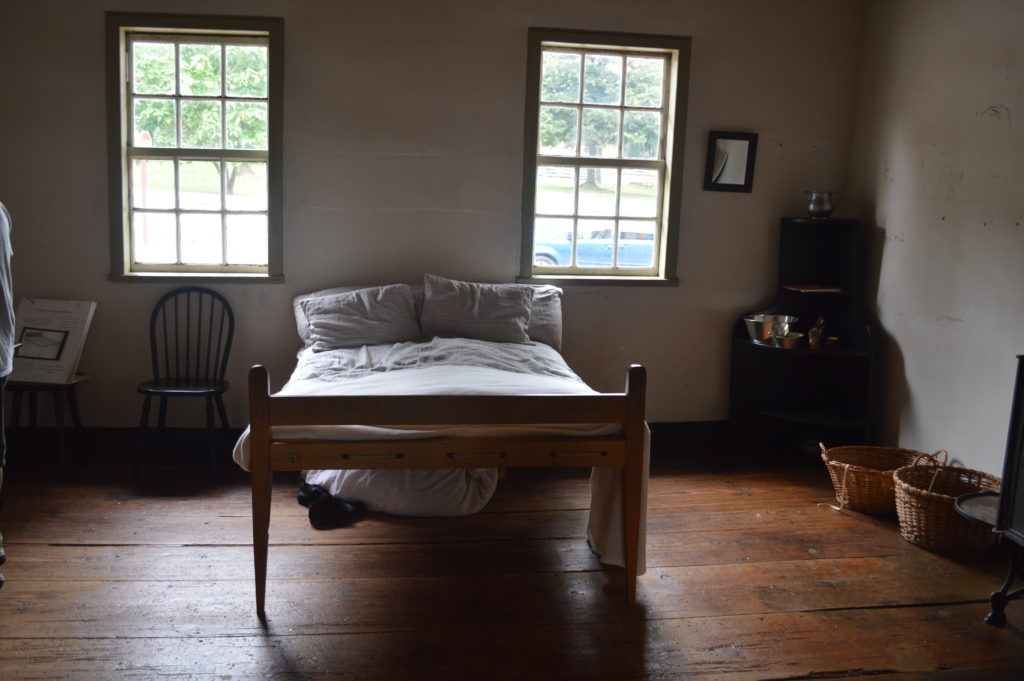 This town had a single brothers’ house and single sisters’ house. If you were age 14 or over and you were single then you would live in one of the houses until you got married. These houses were large, but crowded with about forty people each. For that reason, people would have to share beds with each other.

When a wife or husband died then the other would be sent back to the single brothers’ or sisters’ house. These single men and women would work in their own shop creating various items to sell. 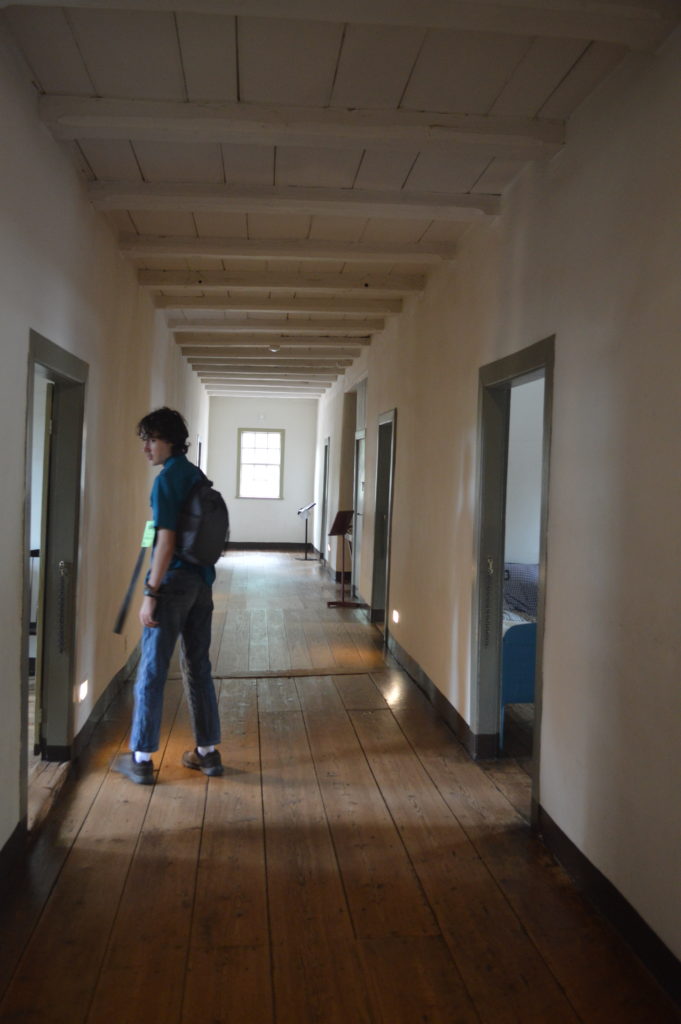 Down the street we stopped into the pottery shop, where they continually made bowls, pots, and many other things on a wheel that the Moravians used back then. We all especially loved the chickens! 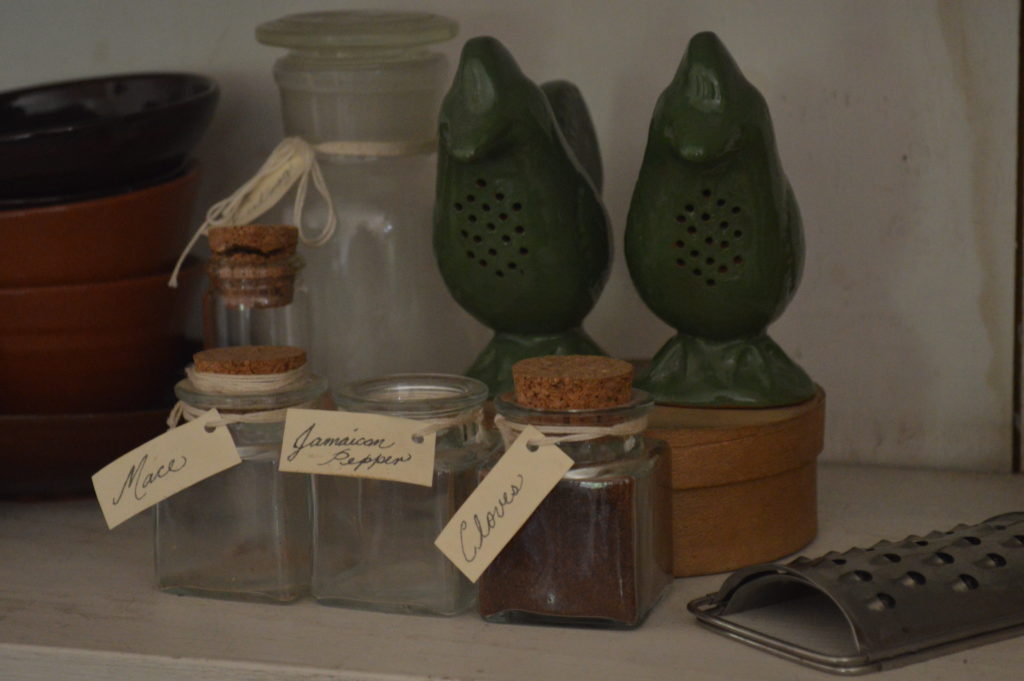 The current staff only made things that the potters would have made two hundred years ago. While we visited, the potter was working on clay tiles for a wood burning furnace, which would be used in the single brothers’ house. 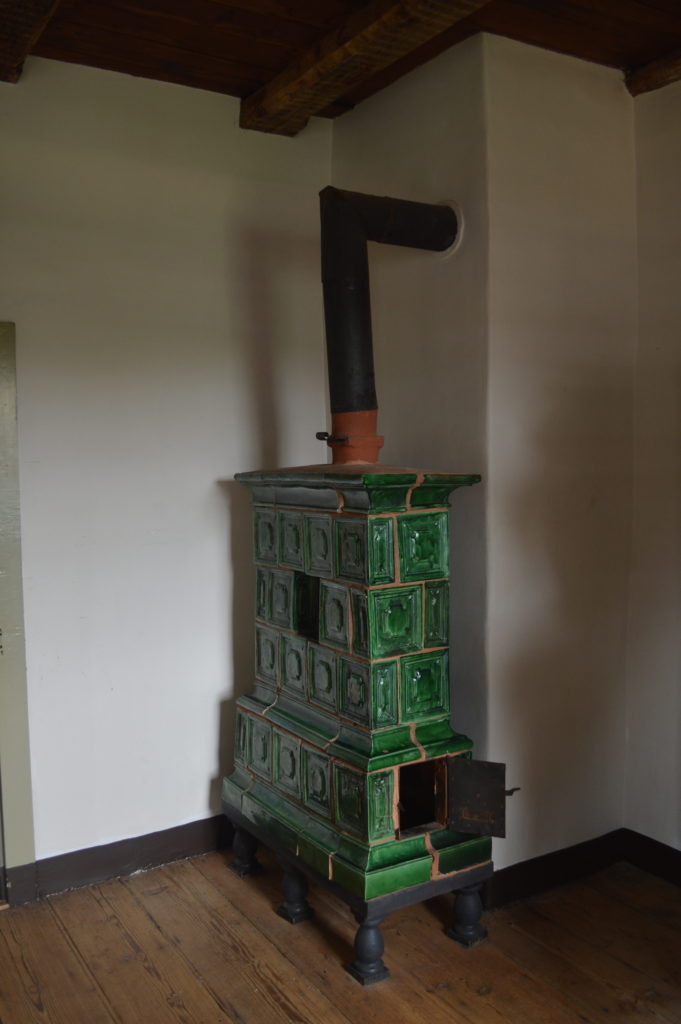 That was really cool! Think about it, they are still actively creating their community, sticking with the original rules when they were around.

In the back of the tavern I discovered a person cooking food! It turns out that he makes the food for the museum staff. He showed me his beef and dumpling soup. He used the produce the two farms to prepare food. In this town there were two farms: one down the street and one on the other side of the town. 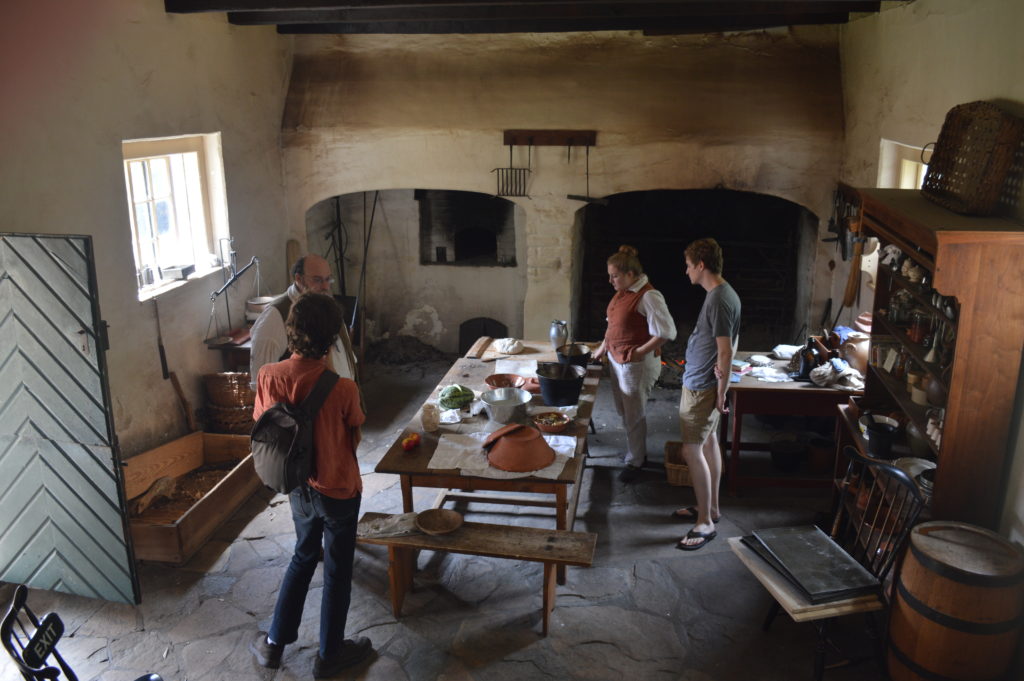 While visiting the doctor’s house, I learned about another job. It was the nightwatchman. I thought this position wasn’t great. He started his day at 9 pm and walked around checking the houses to see if everyone was OK and sleeping. He would check on the sick frequently and get the doctor if needed, and every hour he would blow his shell horn and announce the hour. At 5 am he would be done with his job. He was paid 22 pounds a year.

The town was entirely controlled by the church. For a long time they were basically like their own country. Now, this community was formed prior to the Revolutionary War, so Salem was allowed to slide when it came to the first amendment, which was only created in 1791.

Through the years it got more and more difficult for the church to run the town. Once the industrial revolution came around it was very hard for the businesses in Salem to survive. No one could compete with the factories and it got more expensive for the church to keep their town. In 1849 the church sold the land to the north to a town what became Winston.

In 1857 the church finally allowed the people to buy their property, instead of just leasing it to them. And finally in 1913 Salem merged with Winston and became Winston-Salem. Even though the church doesn’t control the town now-a-days, many of the residence Winston-Salem are Moravian. 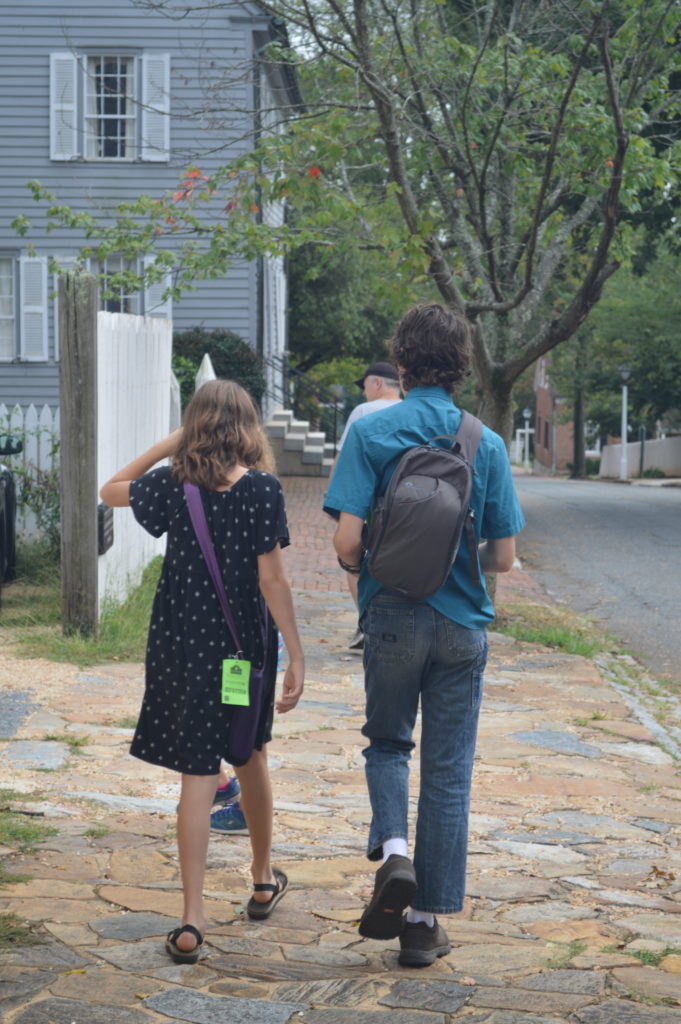 Overall, I was really impressed with the town. I liked that they made everything they used. The town didn’t have to depend on anyone but themselves. It was interesting to observe first hand a town that made everything they needed to survive. And they survived for a long time!